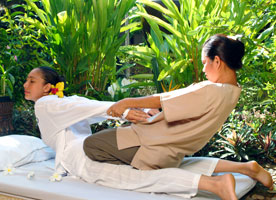 Thai massage is a system of massage and manipulation developed in Thailand, and influenced by the traditional medicine systems of India, China, and Southeast Asia, as well as by yoga.

The massage recipient changes into loose, comfortable clothes and lies on a mat or firm mattress on the floor. It can be done solo or in a group of a dozen or so patients in the same large room. The receiver may be positioned in a variety of yoga-like positions during the course of the massage, but deep static and rhythmic pressures form the core of the massage.

The massage practitioner leans on the recipient’s body using hands and usually straight forearms locked at the elbow to apply firm rhythmic pressure. The massage generally follows designated lines (Sen) in the body. Legs and feet of the giver can be used to fixate the body or limbs of the recipient. In other positions, hands fixate the body, while the feet do the massaging action. A full Thai massage session typically lasts two hours or more, and includes rhythmic pressing and stretching of the entire body; this may include pulling fingers, toes, ears, cracking the knuckles, walking on the recipient’s back, and manipulating the recipients body into many different positions. There is a standard procedure and rhythm to the massage, which the practitioner will adjust to fit each individual client.

The claimed benefits of Thai massage are many, including relief from multiple ailments ranging from asthma and migraines to sprains, bruises, and anxiety. Further benefits include the relief of physical and emotional tension, ameliorated sleep, improved flexibility, a greater awareness of body and mind, and a release of blocked energy.