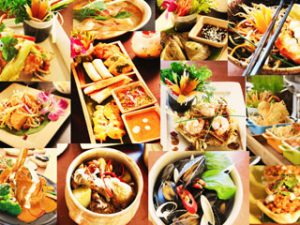 Lots of the ingredients used in Thai cooking are very beneficial to health, one common Thai dish, Tom Yum Soup has been under scientific study for its incredible health benefits.

Frozen meals and takeaways as we know them in the West are uncommon in Thailand with most Thai meals cooked from scratch, using fresh produce. Many of the herbs, spices and ingredients that go into Thai and Asian cooking have disease fighting and immune system boosting properties.

I have listed some of these beneficial ingredients below:

Garlic is used in many Thai dishes. Garlic is grown worldwide, with China producing over 10 million tonnes a year. It can be eaten raw or cooked and has many health benefits. Garlic lowers cholesterol and blood pressure, aids digestion and has both antibiotic and anti fungal properties. This wonder bulb keeps the intestines healthy and can be used to treat coughs and colds. As well as giving you a boost in energy it regulates the blood sugar levels as well. Garlic is also known to act as an aphrodisiac!

Thai’s love chillies – fresh or dried, and your food will come served very spicy unless you specify otherwise!

Chillies originated in South America over 6000 years ago. They are now grown and used worldwide. Chillies, whether fresh or dried have great health benefits if you eat them. They can clear the sinuses and alleviate congestion. They also boost the immune system, keep the heart healthy and can fight inflammation. Red chillies are high in vitamin C and these hot and spicy little fruits can also act as a natural pain relief. Eating chillies has also been known to prevent blood clots and reduce cholesterol.

Turmeric is a plant related closely to the Ginger family and is native to Asia. Turmeric is normally used in dried, powder form and is a great anti inflammatory. It protects the skin and can speed up the healing of damaged skin. It has been known to be used as a treatment for Eczema and other skin problems. Turmeric also acts as an anti oxidant and protects the body from damage. It protects the platelets in your blood which leads to a healthy heart. As well as improving circulation, Turmeric fights against bacterial infections.

Coriander, also known as Cilantro or Chinese Parsley is common worldwide from Asia and the Middle East to Europe and Scandinavia. Coriander has good nutritional value being high in Iron and both vitamins A and C. Coriander seeds can help with digestive problems and help to relieve bloating.

Galangal is a close relative to Ginger and sometimes known as Thai Ginger. Galangal is known to have anti inflammatory properties. It also aids in digestion and can help with stomach aches and sickness as well as improving circulation. Outside of Asia, Galangal can be found in Asian food stores, however if you cannot find it, ginger is a good substitute and has similar benefits although galangal is stronger in taste than the common ginger.

Lemongrass is native to Asia and is widely used in Asian cuisine, especially curries and soups. Lemongrass can clear headaches, stomach aches and can help to fight off the common cold. It can also help with digestion and soothe nasal congestion. Lemongrass also has anti fungal properties.

Who doesn’t love the Thai desert, Fresh Mango and sticky coconut rice?! Mangoes are a tropical fruit native to India. Mangoes have a high nutritional value and contain many anti oxidants, mainly vitamin C, vitamin A, Folate, Potassium and vitamin B6 which is needed for proper metabolic function. This juicy fruit can also prevent anemia.

Guava is a plant related to the Pomegranate, the fruit was first discovered in Mexico but are now cultivated throughout the Tropics. A single Guava provides 100% of the RDA of vitamin C, 4 times that of an orange. Guavas are also high in fibre, vitamin A and Folic Acid.

Pineapples are a tropical plant which originated in South America. Thailand is now one of the top producers of pineapples, second to the Philippines, with almost 2 million tonnes of the fruit being produced yearly. Pineapples contain high levels of the disease fighting vitamin C. Raw Pineapples are also a fantastic source of Manganese which is an essential nutrient stored mainly in the bones. Pineapples are known to lower blood pressure and maintain good eye and gum health. Pineapples also contain enzymes which keep the skin elastic, giving you healthy and glowing skin.